Though Cheung Po-tsai Cave is the best known tourist spot of southwest Cheung Chau, it’s not the only place that’s good for exploring. There’s an excellent coastal trail, winding along a small cove, and a small bay with a beach, passing boulders where cacti grow (yes, wild cactus in Hong Kong), with excellent scenery.

This trail starts on the headland above Sai Wan village, at the southern end of the harbour (aka typhoon shelter). You can head there by walking along the waterfront road – which is popular with weekend and holiday cyclists and strollers.

Or, there’s a footpath along the hillside above the harbour. You can reach this from the Tin Hau temple in the south of the main village. Walk up from there, past housing, and the trail runs thorugh greenery. There’s a small bridge, over a tiny stream, that emerges by a footpath from a large cemetery. The trail then climbs a little, passes through more village housing, then through woodland, down to Sai Wan.

You can start the trail on the headland above Sai Wan village – look for a narrow flight of steps, which drop down from the trail to Cheung Po-tsai Cave: a sign points to Po Yue Wan.

Take care as you walk down between and under huge boulders.

Once past the boulders, you”ll find a concrete footpath with its yellow painted handrail, leading along rocks above the tideline.
A sign announces that this trail was built as an island enhancement project. I’ve always thought it a good idea, but there’s more concrete and metal fencing than necessary, detracting from the scenery. Could get round here befoe the footpath was built – I’ve done so; albeit not as easy as now.
Here, for instance, people could surely walk over the rocks – though a little further on a bridge over a mini chasm is useful.

There’s a break in the concrete path, around the head of a small cove. This, apparently, has something to do with ownership rights – land here maybe belonging to the privately owned park on the left (itself a Cheung Chau oddity: built decades ago by a rich businessman, now still owned by his family but little cared for and little used: seems rather a waste; could be great place if better maintained and opened to public).

You can get round the cove, however – it’s easiest at low tide. There are rough and ready aids as you scramble over the rocks: some small metal ladders up topmost boulders (rarely needed), and small concrete footholds like these in the photo.
When the tide’s real high, it’s far more difficult to get round the cove: must climb over high boulders, even inch along a section of wall – as in these shots. Maybe turn back if this looks to be the case – or get your feet/legs wet!

The concrete path restarts, with these steps leading up to the south of the cove.

There are pleasant views over the cove. Cheung Po-tsai Cave is through rocks on the opposite headland; beyond is southern Lantau Island.

There’s a huge – almost container sized – boulder perched on the rocks at the top of the steps. It’s the Reclining Rock, and is one of Cheung Chau’s most distinctive tors. Sadly, some idiots have covered it in graffiti.

The graffiti’s a real insult to this boulder, which has been perched here for countless years; it’s best seen from a distance, as in this late summer afternoon view.

The trail continues round, then drops down more steps, towards the Italian Beach.

Well, the Italian Beach is the name it’s long been known by to westerners living on Cheung Chau.

Before the trail was built, this seemed a secret place; even today, there are usually few people here. You can swim – but take care, as there are rocks in the shallows.
It’s possible to scramble up from the east end of the beach, for fine views from the rocks above.
From the Italian Beach, there’s a trail up, past ruined farm buildings, to Peak Road. Here, you could turn right, to follow Peak Road towards the main village – and perhaps continue to southeast Cheung Chau and the Mini Great Wall.
Or, turn left, and it’s only a few minutes walk to the tiny harbour at Sai Wan. From here, you could walk back to the ferry pier area. Or, catch a kaitos – like a public light bus on water (but at way less crazy speeds!) – to the public pier by the ferry pier: tho note that kaitos usually wait till they have enough passengers, so if business is slow, may be quicker to walk. 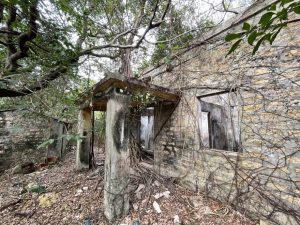 Ruined farmhouse and coastal scenery above and beyond Italian Beach

Walking in southern Cheung Chau with toddler and pushchair